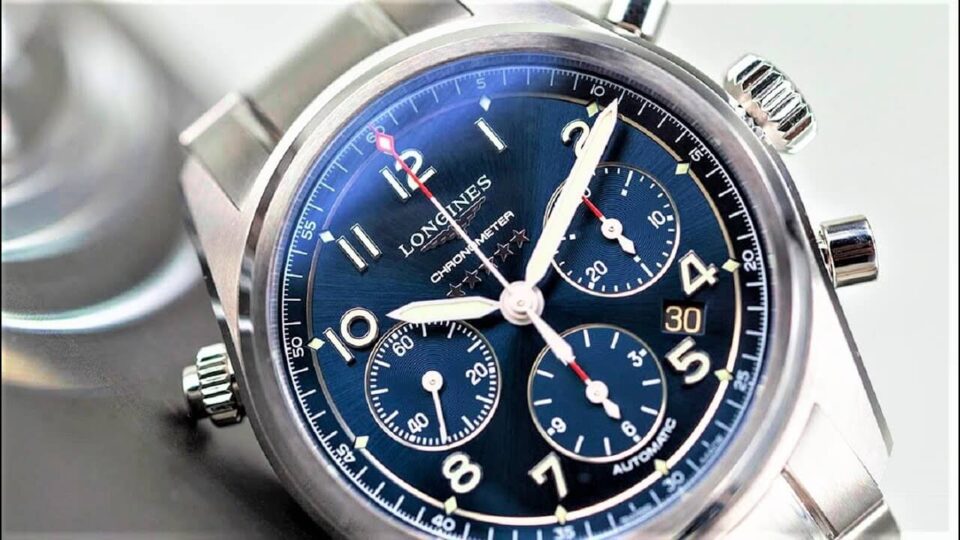 Longines, the luxury timepiece manufacturer from St. Imier, has been in the business for a long time, having been founded in 1832. Longines is the company with the oldest logo in the world of watchmaking, in addition to various horological advances that are always packed in exquisite and high-performing products.

Many people associate this watchmaker with sports, particularly the Olympic Games, or with some of its successful ambassadors, such as Charles Lindbergh. The manufacturer is now a subsidiary of the Swatch Group. The well-known Swiss watchmaker has sold over 34 million timepieces worldwide and has specialized stores in over 130 countries. Here’s a list of the remarkable Longines watches.

One of the remarkable Longines watches is Longines Heritage Avigation Oversized Crown Chronograph Watch. The Avigation Oversized Crown Chronograph, a reworked vintage model from the 1920s, is part of the brand’s Heritage collection. The innovative timepiece is an aviator’s watch, as the name implies, with an enlarged crown that can be manipulated more seamlessly while wearing gloves, as pilots typically do. It has round stainless steel housing with a small diameter of 41 millimeter. Its fluted bezel, built in to be more precise, is made with a single index and can be rotated in both directions, allowing the pilot to set the reference points.

The watch’s steel case has a solid back and is water-resistant to 30 meters. It has gold-plated luminous pear-shaped hands and a black lacquered polished dial with luminous painted white Arabic numerals. It has a caliber L788 and 27 jewels (base movement ETA A08.L11). The movement in question measures 12 ¼ lignes (30 mm) wide and 7.9 millimeter thick. It has a power storage capacity of 54 hours and operates at a frequency of 28,800 vph. The watch has a chronograph with two subdials (for 30 minutes and small seconds) as well as a date display indicated by an aperture at the bottom of the dial. Longines chose a black alligator strap with white stitching for the attachment, which fastens with a steel buckle.

The Evidenza Small Seconds watch, with its business-like classical design and tonneau shape that distinguishes the Evidenza sub-series, is appropriate for the wrist of a stylish and successful man. It has a self-winding mechanical movement caliber L615 (base caliber 2895/2). The watch’s high-frequency beating heart has a diameter of 11 ½ lignes and a thickness of 4.35 millimeter, and it has a power storage capacity of 42 hours. The dial of the timepiece features a flinque pattern.

The model comes in two variants, each with a unique case size, dial color, and other details. Both are executed with an elegant and classic design and color scheme. The black dial on the larger version is accented with silver Roman numerals and hands. It has a case width of 34.9 millimeters and a length of 40 millimeter. The smaller silver model has a case width of 33.1 millimeter and a length of 38.75 millimeter. This version’s face has a silver base with blue painted Arabic numerals and blued steel hands. Each version uses the same wristlet, which is a brown alligator leather strap with a folding clasp. Another feature in common is its water resistance to 30 m.

The Longines Heritage Diver Chrono is an almost replica of a successful diving watch from the 1970s, with its cushion-shaped steel casing enclosing an automatic mechanical chronograph movement. It has the same reputable waterproofness of 300 meters as the model it is based on. It has a fixed bezel and a flange that can be rotated in both directions. The watch has a scratch-resistant sapphire crystal and an inner side with multiple layers of glare-proof coating.

The dial has a black background with a satin finish and a semi-glossy appearance. The blackness of the base is supplemented by several red accents on the dial (specifically, its diving flange and second hand are red and two silver Chrono sub-counters. Small seconds and 30-minutes are indicated by two Chrono indications at three and nine o’clock positions, respectively. On the bottom of the face, there is also a date display aperture. The color combination makes the watch look colorful and sporty. The addition of SuperLuminova coating on its applied hour markers and silver-polished hands improves its visibility.

The self-winding mechanical L651 caliber is housed within the cushion-shaped Longines Heritage Diver Chrono (ETA 2892-2). It has a power reserve of 42 hours and operates at a frequency of 4 Hz. The watch is paired with a black rubber strap that has double security folding clasp and an integrated diving extension that allows it to be worn over a diving suit.

The Avigation timekeeper was made for the British Army in 1949. The watch can also withstand the harmful effects of magnetic fields thanks to the protective chamber made of iron. It has an L704.2 automatic movement with 24 jewels that runs at a frequency of 4 Hz. The caliber with the ETA A07 171 base movement has a diameter of 16 ½ lignes (36.6 millimeter) and a thickness of 7.9 millimeter. It has automatic winding and, once fully wound, it has a power reserve that allows the watch to run for two days.

It has a black lacquered and polished dial with large painted Arabic numerals as the background for the hour scale. The numerals and minute/second markers are painted white and treated with a SuperLuminova coating. On the dial, there are four central hands. The round steel case of the watch is crafted with a solid metal screw-down case-back and offers basic waterproofness to 30 meters.

Longines always managed to stand out from the crowd of top watch brands for its remarkable timepieces. It is well-known for its long history, fine craftsmanship, and high-quality luxury watches. Longines has steadily built strong relationships with various sporting industries since the development of its first chronograph movement in 1878. Longines watches are an excellent option if you want to buy a remarkable luxury watch.

Why Should You Use a Blog Topic Generator?